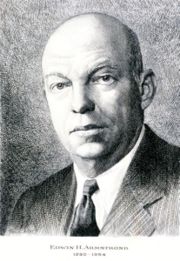 Edwin Howard Armstrong was an American electrical engineer who invented FM radio and its underlying receiver and transmitter technology.

Much of Armstrong's work, including the regenerative circuit, super regenerative circuit, and superheterodyne receiver was conceived in the basement of Philosophy Hall, doing much of the work as an undergraduate in the Electrical Engineering Department. The Supreme Court later awarded Lee De Forest the patent for Armstrong's receiver technology after a prolonged 12 year patent dispute. Armstrong was later pwn3d again by RCA in a patent dispute over FM technology.

The patent dispute proved so financially and emotionally ruinous that Armstrong subsequently committed suicide in 1954, jumping out of his 13th floor apartment; coincidentally, Columbia's electrical engineering department is housed on the 13th floor of Mudd.

Armstrong is one of Columbia's most distinguished alumni and his work with FM led to the declaration of Philosophy Hall as a National Historic Landmark in 2003.