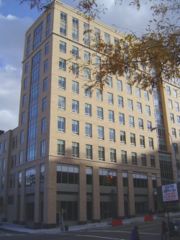 It is located at 1255 Amsterdam Avenue, which is approximately at 120th St. The School of Social Work moved into the building from its former home in McVickar Hall when the former opened in August 2004.

The site of the building had originally been slated for an aquatics field house for the Athletics Department. However, Athletics Director John Reeves's failure to raise any funds for the project resulted in the site being repurposed as the future home of SSW.

Columbia has yet to find a use for the street level space of the building on the corner of 122nd Street and Amsterdam Avenue.