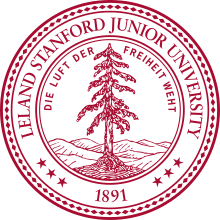 Stanford's actual, official seal actually refers to the school as a "junior university"

Stanford students flee for their lives as their stronger, bolder cousins from Cal assert their dominance.

The Leland Stanford Junior University is a tech industry training facility/venture capital fund nestled in the heart of Silicon Valley (specifically, in Palo Alto, California, less than an hour away from San Francisco). To avoid confusion over whether the "Junior" in the name modifies the preceding proper noun or the succeeding common noun, thus rendering it a glorified community college, the institution is generally known simply as Stanford University.

"Stanford" is an anagram of "snodfart". Whatever your grandparents might think, it is not an Ivy League school. No traditions are sacred at this font of startup firm "disruption"; Stanford even changed its official logo so it would look better on an iPhone.[1] In fact, its campus culture places such an emphasis on tech entrepreneurship and its connections with the surrounding Valley that even a publication as august as the New Yorker was recently forced to wonder whether it is a university at all, asking if it was not, in fact, "now just a tech incubator with a football team".[2]

Leland Stanford Junior, the institution's namesake, died of typhoid at age 15. Yes, the university is named after a high school sophomore - and a weak, sickly one at that. Contrary to popular internet rumors, the Stanford parents did not endow Stanford after they were rudely treated by the president of Harvard who mistook them for riff raff.[3]

Back in 1934, Columbia routed Stanford in the 1934 Rose Bowl, where the Lions defeated the Indians 7-0 in Pasadena. Nowadays Stanford's mascot/team name is Cardinal. As in the color. Hence, even when they team is referred to in a plural context, they are known as the Stanford Cardinal, a la the Harvard Crimson.

Stanford entered the 2011 Applied Sciences NYC competition, lured by Mayor Bloomberg's hopes they would build a campus on Roosevelt Island, but, shortly before the winner was announced, withdrew - for mysterious reasons (rumors have it that it was either because they were frustrated with NYC government rules or had intuited that Cornell was about to win instead). To paraphrase Frank Sinatra, if you can make it here, you can make it anywhere, but Stanford could only make it in the Bay Area, apparently.