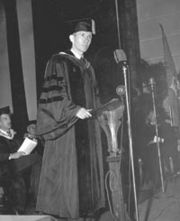 Academic regalia, colloquially known as the "cap and gown" or "graduation robes", is the formal attire worn by degree candidates during various ceremonial occasions.

Columbia's caps and gowns were once all black. Jacques Barzun, while Provost of the University, is usually credited with changing the attire to a slate grey, determining that the lighter colored robes were more comfortable in the summer heat. They have since become light blue to match the school colors.

There is very little rhyme, reason, or standardization with respect to American academic regalia (though, to be fair, the European system is even worse). An effort was made in 1894, when the American Intercollegiate Commission met at Columbia University to decide on uniform attire. However, by the mid-20th century, universities had begun to go their own route once again.

For faculty and doctoral robes, however, the following holds true: the robe itself is specific to the university, while the hood indicates the academic discipline. This is why some faculty members march in NYU, Cambridge, and Harvard robes. In addition, the faculty member wears the robe indicative of his or her highest degree. If the highest degree is an honorary degree, then the faculty member has a choice on whether to wear the robe of the school that conferred the honorary degree, or the one that conferred his highest earned degree.