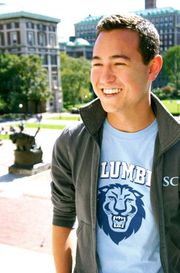 Aki Terasaki CC '12 was the president of the Columbia College Student Council from 2011 - 2012. He was elected in 2010 along with his CUCharge party in the 2011 CCSC elections. Similar to Learned Foote from the previous year, his party did not win a majority of the vote in the first round, triggering an instant-runoff, wherein his party emerged successful after obtaining 51.5% of the vote in the second round.

He also served as president of the Columbia Japan Society his junior year.

During his tenure as president, he successfully led the council in implementing some programs that had previously been only pilots, such as Open Housing. His council was also responsible for the first holistic review of financial aid, the simplification of the student group co-sponsorship process, and return of the "CCSC project grants" begun under Sue Yang. His term was perhaps overshadowed by the sudden resignation of Columbia College Dean Michelle Moody-Adams, but his council managed to coordinate with Interim Dean James Valentini to finish out the year.

Aki majored in economics with a special concentration in linguistics.