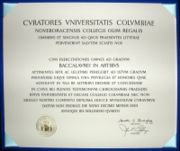 The Columbia College Bachelor of Arts from 2004

A Bachelor of Arts (B.A.) is the standard undergraduate liberal arts bachelor's degree. At Columbia, it is granted by the Faculty of Arts and Sciences through Columbia College and the the School of General Studies. The standard time to completion for a Bachelor of Arts in Columbia College is eight semesters, for a total of 124 credits. Some have done this in three years or less. Others, like super seniors, have taken up to five years.

The Bachelor of Arts was first granted at King's College in 1758. The formal name for the degree is Artium Baccalaureus, a Latin phrase that signifies the European heritage of the degree as well as the medieval conception of the "seven liberal arts" of grammar, dialectic, rhetoric, arithmetic, music, geometry, and astronomy. For many years, the degree granted by Columbia College was denoted "A.B."

This appears to have changed in recent years (though transcripts provided by the Registrar's office still denote the program of study as "A.B.") to the more conventional "B.A." The Latin itself on the degree has also changed to Baccalaureus in Artibus, a phrase that instead of meaning Bachelor of Arts, now translates into Bachelor in Arts by replacing the (correct) genitive plural of ars with the (incorrect) ablative plural.

Also, the Latinization of "New York" (formally, Novum Eboracum) has been rendered as both (in genitive) Noveboracensis and Neo Eboracensis. The jury is out on which one is correct.

Recently, there has been a movement afoot to redesign the diploma, as few people in our modern world are aware that CVRATORES VNIVERSITATIS COLVMBIAE means "The Trustees of Columbia University". A university poll conducted in the early 2000s, nevertheless, indicated that the majority of then-students desired to keep the diploma in Latin.

For its part, the administration has waffled on change, offering, among other excuses, that the plates for printing the diplomas have been in service for a long time (nearly a century) and cannot be recast and remade on a whim.

This is not true, as the Columbia College diploma from 1935 will attest to. In addition, the plates were just recast this year to make the first line larger and more prominent and move the signatures, as seen below.