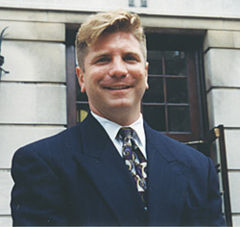 Furda had begun working in admissions at his Alma Mater, the University of Pennsylvania, following his graduation in 1987, and came to Columbia in 1991. He planned on leaving to pursue a PhD in 1995 when he was offered the position of acting director by Chris Colombo.[3] He stayed on permanently for a total of 9 years, and was succeeded by Jessica Marinaccio.[4]

During his tenure as director of admissions, Furda expanded cross-country recruiting and oversaw a dramatic increase in Columbia's popularity among college applicants.[5]

After 17 years in admissions, Furda wanted a change of scenery, saying "although I felt I didn't want to be in college admissions any more, I wanted to be here."

He has been the force behind the Columbia Alumni Association and many of its initiatives, including the University-wide Alumni Directory.

In January 2008 Penn announced that it had hired Furda to be its director of undergraduate admissions, bringing Furda full circle.[6] Apparently Furda decided he wanted to be back in admissions after all.