James J. Valentini is a professor of Chemistry at Columbia and the sixteenth and current Dean of Columbia College. He assumed the responsibilities of the deanship and of the position of Vice President for Undergraduate Education after Michele M. Moody-Adams resigned in the summer of 2011.

He's popularly known as Deantini after a Bwog naming competition, and was previously known by his initials JJV to many of his students.

Student from more recent class years have expressed concerns about the apparent 'cult of personality' that has developed around Valentini as a dean, given Valentini's lack of accessibility to students (except for positive photo-ops and through mass-email).

He generally teaches Organic Chemistry and leads a small seminar on chemistry for high school students as well. In 2009, he created a small seminar for non-science majors on energy conservation and general energy principles. The course was designed to fulfill the science requirement of the Core. 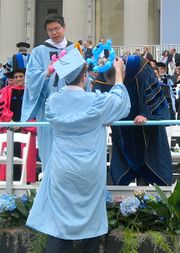 Deantini is spontaneously crowned at Commencement 2013.

Valentini has served in a number of administrative roles since joining the faculty. He served as chair of Columbia's Chemistry Department from 2005 to 2008 and was later the directer of the Chemistry Department’s undergraduate studies program. He has also served as chair of the Committee on Science Instruction for several years, and therefore represented both Frontiers of Science and the science requirement to the Committee on the Core Curriculum until assuming the deanship in 2011. He also served on Columbia College's Committee on Instruction, and was a member of the committee that selected Michele Moody-Adams after Austin Quigley stepped down.

Deantini is widely popular among the students for his "aw-shucks" demeanor and general good cheer/friendliness. Around finals he'll often distribute chocolates around Butler Library. At Commencement 2013, some Columbia College student leapt up to crown him with one of the blue inflatable plastic crowns.

Valentini married Teodolinda Barolini, the current chair of the Italian Department, in 2001. They met while serving on the executive committee of the Faculty of Arts and Sciences in 1994.[1] Notably, closer oversight by Arts and Sciences of Columbia College was one of the rumored causes of Moody-Adams' resignation.