From Wikipedia's article on Columbia University. 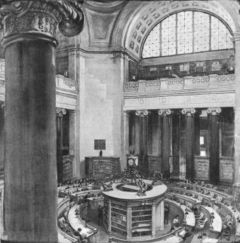 Low Memorial Library was the university's main library on the Morningside Heights campus until the completion of Butler Library in 1934. It was named after Seth Low's father, Abiel Abbot Low. It is now an administrative building, housing Bollinger's office, as well as the University Archives, the Columbiana Collection, the King's College Room, the Columbia Security office, and the Visitor's Center.

The Low Library Rotunda is the University's primary ceremonial space on campus. It hosts major prize ceremonies such as the Pulitzer and Bancroft, hosts dignitaries and heads of state during the World Leaders Forum, and pretty much anything that's fancy and formal. A giant mural on the third floor of Butler Library depicts the ceremony held to honor the Queen of England on her visit to Columbia in 19??. When Low still functioned as a Library, the rotunda was the main reading room and held the circulation desk.