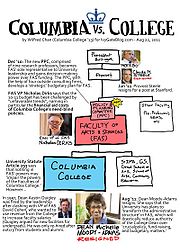 Moodygate is the name Bwog gave to the unexpected, sudden, indignant resignation of Columbia College Dean Michele Moody-Adams. Moody-Adams' resignation was apparently spurred by the McKinsey Arts and Sciences Report[2].