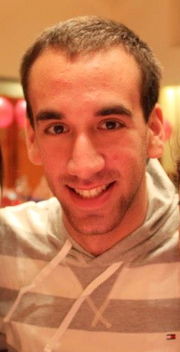 Seffi Kogen GS/JTS'14 is the current president of the Columbia/Barnard Hillel. He is a History major and is originally from Fair Lawn, New Jersey. Seffi has been involved in the leadership of Hillel since his first year on campus, ascending to the presidency at the beginning of 2013. He is responsible for managing student-staff relationships within Hillel and representing Hillel to the student body and administration.

During his first year, Seffi served as the Director of Campus Affairs for LionPAC. In that role, he planned several events, including a panel on Iran moderated by Dean Awn. Seffi has also served on the leadership of Koach, Shabbat Meals Committee, and JelLO, among others. At the end of the Fall 2011 semester, Seffi was elected Vice President of Hillel for 2012. As VP, Seffi planned the first ever Hillel Night at a Columbia Men's Basketball game. At the conclusion of the Fall 2012 semester, Seffi was elected President. In his first semester as President, Seffi created the KraftStart Grants so as to fund good ideas in the Jewish community.

Seffi has served on the Student-Faculty Committee of JTS since 2011 and on the Columbia Undergraduate History Council since 2012.

Seffi has been published several times on The Times of Israel, writing about Jewish identity and Israel advocacy. [1] [2] [3]