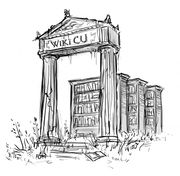 Going forward, Sam Aarons has transitioned control to Bwog.[12] ESC is also the only other known organization to have an active user account.

WikiCU is powered by MediaWiki software, which records several statistics. As of this moment, the wiki has 4,145 useful articles, or 11,508 if you count all the shorter articles, redirect pages, talk pages, and so on. The wiki also has 2,012 images and other uploaded files. So far, 1,533 users have registered, and 22 have additional administrative powers including the ability to fly.