From WikiCU
(Redirected from Gayatri Spivak)
Jump to: navigation, search 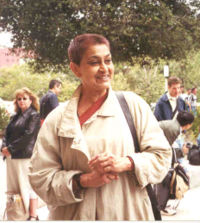 Gayatri Chakravorty Spivak is a vociferous literary critic who was named a University Professor in March 2007. She is also a founder of the Institute for Comparative Literature and Society, a participant in elementary and intermediate Chinese classes, and an occasional instructor, on leave in Spring 2008.

She is a noted expert and translator of the ideas of Jacques Derrida, and is known for helping found the discipline of postcolonialism altogether, particularly the concept of the subaltern.[1] She has also been name-checked in a song by electro-punk band Le Tigre.

Some students have found Spivak's methods of instruction arbitrary, capricious, and vain. One attempt to team-teach a course with Hamid Dabashi led to legendarily disastrous results.[2]

Her scholarship has been criticized for using "unreadable jargon" and forcing a false dichotomy between "white, Western, imperialist males" and "designated, politically correct victims" on her opponents to bludgeon them into submission. [3]