From WikiCU
(Redirected from Latenite)
Jump to: navigation, search 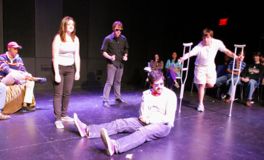 Latenite Theatre is a Columbia performing arts group that produces an anthology of short student-written plays every semester, with a reputation for general chaos and irreverence.

Latenite was created in 1995 by a group of Theatre and English majors who wanted to produce their own original works. They offered their innovative theatrical fare after other events on campus were over; hence the name Latenite Theatre. Fifteen years later, Latenite continues to evolve while maintaining its commitment to the student playwright. They have a simple purpose: to offer playwrights the opportunity to see their work on stage, giving them freedom to experiment, to take artistic risks, and above all, to have fun in a non-competitive artistic environment.

Plays from previous anthologies can be seen at: