Barack Obama CC '83, a former US Senator from Illinois, will be the 44th President of the United States. He will become the first African-American and the first Columbia graduate to hold the nation's highest office. 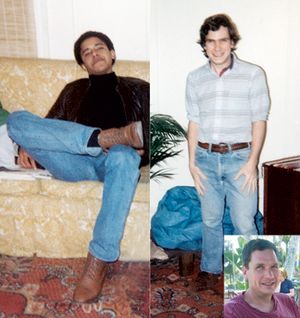 Columbia at that time did not guarantee university housing for all students, so Obama lived off campus. He claims to have spent his first night sleeping in an alley near the corner of 109th and Amsterdam Avenue and washing with the homeless next to an open fire hydrant.

Near the same corner, on 109th between Amsterdam and Columbus Avenues, Obama eventually found an apartment, which he moved into with fellow Occidental College transfer Phil Boerner in the fall of 1981. Boerner, who remained Obama's friend throughout his college years, describes the apartment as a third story walkup with a railroad layout and a missing doorbell. The heating frequently failed, one of the reasons Obama wound up spending so much time in Butler Library. At other times, the two roommates read their books under blankets. Their hot water was also irregular, and they often made use of the Columbia gym showers. They frequently hosted guests from their Occidental days, and Obama was reportedly a gracious host, doing grocery shopping and cooking chicken curry.[2]

After their first semester, Obama tried to find a better apartment for himself and his friend, but was only able to locate a studio. He eventually moved into a walkup on E. 94th St., in Yorkville, where he would "chat with his Puerto Rican neighbors about...the sound of gunfire at night".[3]

Sources first differed on whether he wrote his senior thesis on Soviet nuclear disarmament[4] or the North-South debate on trade and the "new international economic order"[5]. Later, it emerged that he had not really written an official thesis at all: students were not required to do so at the time, and what was considered his "thesis" was really a long seminar paper. Obama wrote his for Prof. Baron's American Foreign Policy class. A search has been launched[6] for a copy of the paper, which was confirmed to have been on the topic of Soviet disarmament. Baron, Obama's de facto "thesis" advisor, is now retired to Florida, and claims to have lost his copy of the paper in a move some time ago.

It has been reported that Obama graduated without honors[7], but if the policies then were the same as they are today, he would not have been eligible for Latin honors, because he spent only two years in the college. After graduation, Obama hoped to become a community organizer, but could not find work as one, and joined a consulting firm instead.

In spring 1983, Obama wrote at least one article for the now defunct campus publication Sundial, a discussion of the aims and methods of campus anti-war groups.[8] His friend Phil Boerner explains that during this period, Obama wanted to be writer rather than a politician.

The racist and anti-Semitic graffiti he sometimes encountered on bathroom walls on campus (how times never change!) helped Obama form his ideas about race and class. He wrote of "the almost mathematical precision with which America’s race and class problems joined; the depth, the ferocity, of resulting tribal wars; the bile that flowed freely not just out on the streets but in the stalls of Columbia’s bathrooms as well".[9]