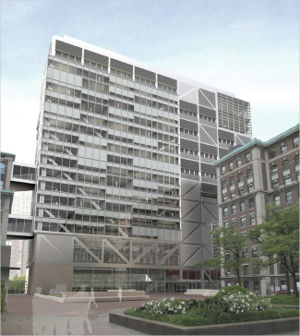 Plan: a rendering of the Northwest Science Building looks sinister but contextual, blending the gray of the new structure with a grayed trim on Pupin to make it look as if it fits in well 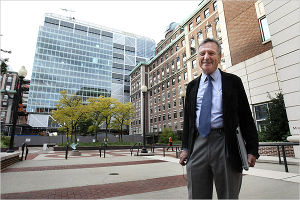 Reality: Moneo and what has metamorphosized into a bluish, glassy monstrosity both attempt to tower over poor, increasingly antiquarian Pupin Hall

The Northwest Corner Building (known previously as the Interdisciplinary Science Building, and Northwest Science Building before that, and casually as NoCo) was destined by Columbia to fill the last remaining plot on the Morningside Heights campus. It was built over the Levien Gym, between Pupin Hall and the Havemeyer extension (Chandler Hall), as well as the last undeveloped portion of the Grove just north of Levien and west of Pupin. The project started on 19 March 2007 and first occupancy began in 2009.

The building is on the southeast corner of Broadway and 120th St, opposite Barnard's Diana Center. It is considerably taller than neighboring Pupin and Chandler Halls, though it still connects to them via pedestrian bridges at multiple levels, similar to those connecting Pupin, CEPSR, and Mudd.

The 188,000 square foot building features a campus lobby, entrance to Levien Gym, Joe the Art of Coffee cafe, the Science and Engineering Library, a large lecture hall, several classrooms, faculty and administrative offices, and 7 floors of science and engineering laboratories.

The lead architect was José Rafael Moneo, selected by Bollinger for his "extreme sensitivity to context". To that end, Moneo designed a building shorter than would have been allowed at the site and hid mechanicals that would have otherwise been stored on the roof.

The Northwest Corner Building was designed by Moneo along with New York-based Davis Brody Bond. Upon its opening, it was certified as LEED Gold.

The building announced a departure from the McKim, Mead and White architecture that dominates many of the original campus buildings, and which served as the master plan for the campus since 1896. It does not, however, operate as a quick-fix in the architectural vein of Uris, Mudd or even CEPSR that lacked a significant architectural statement in hopes of placating a need for space.

A significant hurdle in the design was attempting not to interrupt with Levien Gym. As noted in an article in the New York Times, the design consists of "three enormous parallel trusses in the lower part of the building. These take the weight of the laboratories, classrooms and offices above and distribute the load — almost as a tabletop would — to columns that flank, but do not penetrate, the basketball court."[1]

This approach has created a column-free space directly under the trusses, which is occupied by the library. The room is almost transparent, with window walls overlooking the campus and Broadway. “For the first time, actual academic life will be visible from the street,” said Mark Wigley, dean of the Graduate School of Architecture, Planning and Preservation.

Diagonal elements in the truss work and other structural bracing are expressed clearly on the facade, giving the building its overall character.

In other words, it does not look like the red-brick buildings that have dominated since McKim, Mead, and White drew up the master plan in the 1890s. But with so much steel in the science building, any brickwork would merely have been a thin cladding.

It should be noted that the Astronomy Department lodged significant complaints about the building, as it now blocks out 2/3 of the nighttime sky, rendering the observatory atop Pupin more or less useless.

Bollinger also stipulated that the building show a commitment to embracing interdisciplinary science. In this vein, the building is insulated to reduce the impact of vibrations from the subway on the laboratory spaces. This has proven especially useful in some of the labs working on nanotechnology (like graphene), where even the slightest vibrations can disrupt experiments.

The greatest challenge facing the building's construction was the mandate it be built atop the school's underground gym, with no interruption in the gym's usability. In the 1970s, when Dodge Fitness Center was built, the Levien Gym was fitted with 4 super-columns at its corners, which would allow a building to be constructed above it without pesky additional columns. The Northwest Science Building was constructed on these super-columns, thus placing no weight on the Levien Gym roof, allowing it to remain open. Nevertheless, Moneo still had to employ truss construction to keep the building "floating" over the gym rather than resting on top of it, ensuring the basketball season could continue through construction.

In a lecture on campus in June 2012, lead architect Jeffrey Brock joked that with enough people, one could have "pushed" the building onto Broadway due to this "floating" construction. Probably not something you say aloud.

History of the site

Tennis courts occupied the site for decades prior to construction. At one point in the 1960s, it was proposed as the home of a new Life Sciences Building, but was abandoned in favor of the other side of campus, where Fairchild was built.

The Northwest Corner Building was the source of the Athletics Facilities Scandal. In the early 1990s, the Athletics Department proposed an extension of Dodge for the site that would hold a teaching swimming pool, racquetball courts, and an international squash court. When the Athletics Director at the time, John Reeves, was unable to raise any money for construction, it was decided to use the site for a science building with a few floors for athletics. But when President Bollinger took office, Reeves's boss, Provost Jonathan Cole, "forgot" to tell PrezBo about the the plans. Cole decided to build a science-only building instead, without informing Reeves of the change in plan. Reeves found out when the Spectator broke the news about the building in 2004.