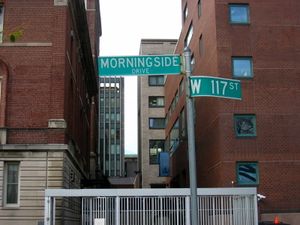 A vestigial 117th Street sign can still be glimpsed on Morningside Drive, between EC and Faculty House

117th Street does not exist. At least, not in Morningside Heights. The stretch of the street that once lay betweeen Riverside Drive and Morningside Drive was first eviscerated by the main Columbia campus, which when constituted as a superblock in the 1890s stretched from 116th Street to 120th Street. The next segment to go was that between Broadway and Claremont Avenue, swallowed for the Barnard campus.

The remaining portion of the street, between Amsterdam Avenue and Morningside, was actually developed with rowhouses and became known as Dean's Row because it contained the original homes of many Columbia deans, as well as language houses and other organizations, including:

But these were all torn down, and the street abandoned, when the elevated plaza that leads to East Campus and the International Affairs Building was constructed in the 1960s and 70s.

A vestigial street sign announcing the presence of 117th Street still stands on the eastern side of Morningside Drive where it once intersected with the street. It now points to the ugly metal gate between Faculty House and East Campus.