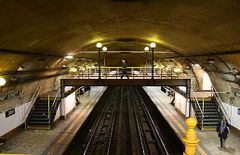 The depths of the 168th St subway station.

168th Street is a subway station on the (1), (A), and (C) trains. It is the closest stop to the Columbia University Medical Center, including the Health Services Library. It is exactly 7 minutes from 116th Street on the (1) train. It is also near the Wendy's that's closest to campus, although deciding to ride the subway up to 168th for a Wendy's run with a bunch of friends in the middle of the night before your Principles of Economics midterm probably isn't the best idea in the world.

It is one of the deepest stations in the entire subway system and requires an elevator to exit.