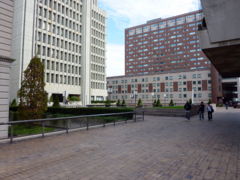 
In 2010, Ancel Plaza was home to the graduation ceremony for Barnard College, since the construction of the Diana Center caused Barnard's open lawn (Lehman Lawn) to be too small to host the ceremony.