The Arts Initiative at Columbia University was created in 2004 by President Lee Bollinger to promote "the role of the arts in the university, and the university's role in the arts". The Arts Initiative can be found online at artsinitiative.columbia.edu. Its offices are located in Dodge Hall. Melissa Smey is the program's executive director, as well as the executive director of Miller Theatre.

The program was founded in 2004 and was initially part of the Office of the President. Bollinger brought on Gregory Mosher, already well-known in the New York arts scene, as director. The program was initially quite small, but began expanding with additional funding from the President's Office, establishing many of its programs within the first three years. In fall 2009, President Bollinger announced that the program would be moved to the School of the Arts, a shift in administrative reporting that raised alarm among undergraduate students.[1]

In 2010, Mosher stepped down as director, being replaced by Miller Theatre Director Melissa Smey in 2011.

The Arts Initiative was created to re-invent the role of the arts in the university, and the university’s role in the arts. This effort now spans the campus, unconstrained by venue, department, field, or program, and reaches out into a diverse international culture. Among its aims are to make the arts part of the experience of every Columbia student's education and to promote a life-long involvement in the arts.

This enterprise rests on three pillars. The Initiative nurtures the vast artistic energy – nearly 150 groups, departments, and programs - on Columbia’s campus. It creates and strengthens links between Columbia and the wider culture. It connects the arts with other ways of understanding and acting in the world. 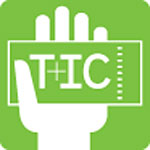 The Ticket and Information Center (TIC) opened in January 2008 and has since dispensed over 500,000 free and discounted tickets to the Columbia community. Operating both in the Lerner lobby and online, the TIC features campus events of all sorts, NYC cultural events, and discount movie vouchers. By special arrangement with Telecharge and select Broadway producers, the TIC has at last created an alternative to student rush by selling student-priced tickets in advance through the Collegetix program. The Ticket and Information Center staff fields questions ranging from Carnegie Hall's address to when the Columbia University Orchestra holds auditions. TIC operates in partnership with the Provost's office, with additional support from Columbia College and Student Services.

ArtsLink represents the efforts of the Arts Initiative, its colleagues at Columbia, and leading New York City cultural institutions to create a program that makes NYC arts and cultural events available to students as an extension of the classroom.

Before each semester, the Arts Initiative compiles a list of performances and exhibits from the upcoming NYC cultural season, which may be pertinent to the curricula of that semester's classes. They provide all interested faculty with the details of each event. Professors may assign an event to their class syllabus simply by sharing the link from the Ticket and Information Center's online event calendar with his class via e-mail or CourseWorks. Students can click to buy a discounted ticket online, and pick up the tickets at the venue or at the Ticket and Information Center (TIC) in Lerner Hall.

Since the tickets are secured via the Ticket and Information Center, professors do not have to negotiate with venues, and students receive considerable discounts on their tickets.

The Arts Initiative began testing this program in the Spring 2009 semester and successfully launched it in the Fall 2009. Past events that students attended via ArtsLink include the Donmar Warehouse production of Hamlet, starring Jude Law, as well as In the Heights, Next to Normal, and the 2010 revival of A View from the Bridge.

Arts Initiative home page]]The Arts Initiative's website, the University's web compendium of campus and NYC arts information and resources, is now accessible directly from the Columbia University homepage. Over forty thousand visitors a month visit the site to link to Columbia's major arts schools, programs, organizations and venues, the Ticket and Information Center, listings of jobs/internships, arts libraries, campus rehearsal and performance venues, and much more. Through the Arts Initiative website, site visitors can sign up for the Arts Initiative's weekly newsletter, which goes out every Friday and provides a short list of on-campus and city-wide events for the upcoming week, normally for $20 or less.

is a program that grants undergraduate CUID holders free admission to 34 New York City museums and institutions, including The Metropolitan Museum of Art, MoMA, The Cloisters, The Intrepid Sea, Air & Space Museum, The Morgan Library and Museum, and more. Students only need to present their CUID with a valid sticker for that school term (which CU and Barnard students may obtain by visiting the ID Center in Kent Hall). Passport to Museums is one of the Arts Initiative's most popular programs. A complete list of the participating museums is available here.

The Columbia Alumni Arts League was established in late 2006 to make it possible for Columbians from all schools to stay involved in the arts – and with each other - after graduation. It has since fallen under the purview of the Office of Alumni Development. The Columbia Alumni Arts League provides member discounts and perks at 70 leading NYC cultural organizations, while CAAL Nights bring alumni together several times a month at a dazzling variety of arts events. In 2007, President Bollinger and Jean Magnano Bollinger began a tradition of presenting the graduating class with complimentary one-year memberships; in 2009 over 4,000 graduates took advantage of this opportunity. CAAL also maintains a web listing of local arts events featuring alumni and sends a weekly newsletter featuring exclusive and affordable cultural opportunities to over 6,000 members.

The Gatsby application form is now online at CUArts here.

Networking and the Lunch With The Arts Initiative Series 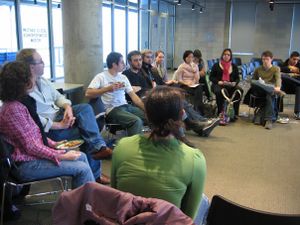 Students participate in a Lunch With The Arts Initiative Event

Lunch With The Arts Initiative is a networking lunch series that provides graduate and undergraduate Columbians with opportunities to collaborate and discover more about the Arts Initiative and the arts throughout Columbia.

Need funding for your own arts-related project? Interested in joining a campus performance group or working in an arts admin internship in Manhattan? Want to learn how to buy cheap tickets to on campus events, as well as to Broadway, Off Broadway, Lincoln Center and more? Sell tickets to your own campus event? Market your events in fresh ways that are also environmentally friendly? Lunch With The Arts Initiative provides students a forum to discuss and discover answers to these questions and more.

Students can join the Arts Initiative for the semester-long series to network with other students who are also passionate about the arts. Students can come to an individual session, or join the Arts Initiative for all four. The Arts Initiative has your questions--and lunch--covered. Some themes from past semesters' series include: Arts Smarts: How To Get Connected On Campus, Marketing Your On-Campus Event: Life After Flyering, The Gatsby Charitable Foundation: A Novel Way To Fund Your Arts-Related Projects, Arts Smarts: Spring Into The Arts By Networking and Sharing Resources 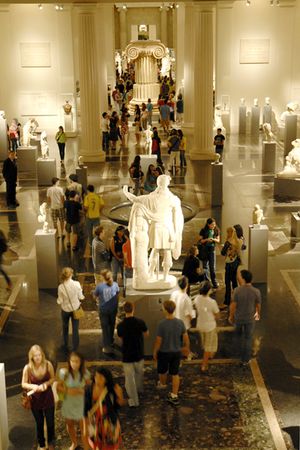 Columbia students at the Met

At the first annual Metropolitan Museum Orientation Party in 2007, nearly 1600 incoming students from Columbia College, SEAS, Barnard College, and the School of General Studies were welcomed to Columbia with exclusive access to the Egyptian, African, and Greek and Roman galleries for a reception and viewing. The Arts Initiative, Provost's office and New Student Orientation Program hosted. It will hopefully remain an annual event.

The Arts Initiative, the School of International and Public Affairs, and the Center for the Study of Human Rights presented a preview screening of Blind Mountain, a film by Visiting Columbia Artist Li Yang. The film, which drew standing ovations at Cannes and around the globe, explores China's problem of human trafficking due to the One Child Policy. Following the screening the filmmaker took part in a conversation with the audience which was led by Professor Carole Vance, Director of the Program for the Study of Sexuality, Gender, Health, and Human Rights, and Professor Andrew Nathan, Class of 1919 Professor of Political Science and former Chair of the Political Science Department. This event was part of the Arts Initiative's wider China project which seeks to enrich mutual understanding by linking China's vibrant contemporary arts and culture to a wide range of academic disciplines and professions within the Columbia community. 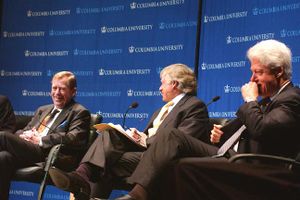 At the invitation of President Bollinger, Václav Havel arrived at Columbia University on October 26, 2006, for a seven-week residency featuring lectures, interviews, conversations, classes, performances, and panels centered on his life and ideas. The visit was organized by the Arts Initiative at Columbia University.

Václav Havel's visit to Columbia focused on an exploration of the connection between art and citizenship. In addition to the events with President Havel, the Arts Initiative organized a series of symposia on specific art forms (theatre, msuic, architecture, art, film, literature) and citizenship. Each of these were moderated by Columbians; several were presented in partnership with some of New York's leading cultural institutions.

A series of events at Miller Theater in 2005-2006 featuring speakers like Joan Didion, Oliver Sacks, Malcolm Gladwell, Simon Schama, and others.

Renowned director Peter Brook and his company, the International Center of Theatre Creation (CICT), spent a month in residence at Columbia University in the spring of 2005. During their residence they mounted the U.S. premiere of Tierno Bokar, a theatrical exploration of the power of tolerance.

With this residence, Brook for the first time integrated his work into the life and culture of a large urban university. The company worked with the resources of Columbia, Barnard, and the Harlem community and encouraged students, faculty, and the public to participate in an ongoing dialogue about the social, political, religious, and historical questions raised by performances of Tierno Bokar. Events included symposia, lectures, workshops, and class work. All programs were sponsored by the Arts Initiative in partnership with the Harlem Arts Alliance and Barnard College.

The Arts Initiative offers a wealth of resources for student artists and their projects, whether they are working within or outside the purview of the university. Among the resources available on the Arts Initiative's website are:

Save the Arts Initiative