Banquet in Honor of the King of Spain 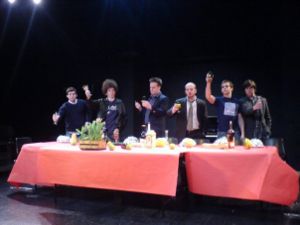 Six of the seven banqueteers.

On March 29, 2007, seven students organized a Banquet in Honor of the King of Spain in the Lerner Black Box. Members of the Jester, The Fed, and other campus organizations including KCST were tapped as banqueteers, though all were invited to attend in various capacities. Eric Foner was the invited guest. Though the show was originally planned to be a sketch comedy performance, this concept was dropped several weeks before. The new concept was kept a secret from everyone with the exception of the banqueteers themselves.

The event was heavily advertised as a mysterious type of performance in the Black Box and drew a moderately sized audience. Before the show, Pitr told Spec. "The performance will span centuries of history but will also be very immediate and present and topical"[1] and lots of other crazy stuff.

The night of the performance, the lights went up to reveal 7 people eating whole roast chickens quietly talking amongst themselves at a banquet table on stage. They made no effort to recognize the presence of an audience, much less entertain them.

Although the audience was obviously confused for the first few minutes of this display, they soon began to descend onto the stage to take small bits of food. The banqueteers did not stop anyone from enjoying the feast, and soon enough, the entire crowd was eating a variety of apples, oranges, peppers, melons, bread, and chicken, live on stage. Moreover, copious amounts of wine and vodka were free for the taking, and most audience members and all banqueteers drank to excess. A number of banqueteers then toasted to the King of Spain, and a brief question and answer portion capped the evening.

The stage was left a complete mess.