Beta Theta Pi, which arrived at Columbia in 1881, is a fraternity on 114th Street. Beta was removed from the Columbia Greek system in 2000 for charges of drug abuse, among other things. Members of the Class of 2006 resurrected the troubled wrestling frat in 2002, as an organization primarily composed of students involved with student government. Members are now required to do community service and maintain a GPA above 3.2.

For the last three years Beta has had the highest Greek Life GPA. In the Spring Semester of 2009 the overall GPA was a 3.8 according to the Center for Greek Life.

Recently, Beta has become a hub of Math, Physics, and Political Science Majors, as well as active musicians (given recent additions to their common spaces), hosting numerous music events and providing a practice space for several campus music groups. Beta is also one of the only fraternity houses to have its own pool table, cat, and dog. 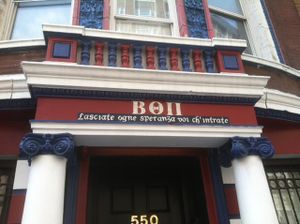 Beta Theta Pi was founded at Miami of Ohio in 1839 and its mission is to develop principled men to lead a principled life. The Columbia chapter was founded in 1881 and is one of 125 chapters of this international fraternity (www.betathetapi.org) The Beta brownstone on 114th Street was for a long time the only fraternity brownstone not owned by Columbia, and has been the chapter house of Beta Theta Pi since 1933. The chapter house was acquired by the Betas in 1910 when the Theta chapter of Phi Sigma Kappa went inactive. Since 1933 the Betas have been a fixture of Greek life on 114th Street. The Beta house received a major renovation in 2005 and is now pretty teched out.