Difference between revisions of "Bethany Carkhuff" 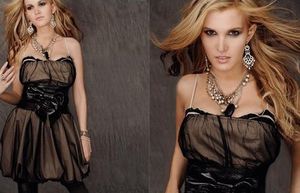 She came into the public spotlight after turning down a role on the fourth season of the reality show, The Simple Life. She has also appeared on television awards shows, most notably the MTV Video Music Awards, as well as various other public venues. She has also made appearances in acting roles and as herself in multiple television shows, some of the most notable being Gossip Girl, Castle, and Supernatural.

For some reason, she was constantly the subject of discussion on the original Bored@Butler website and subsequent anonymous gossip sites such as JuicyCampus. Supposedly, campus safety had to respond to threats made on these websites, prompting Carkhuff to permanently move off-campus immediately after the 2006 Spring Semester ended.

Carkhuff entered Columbia College in 2003 and was elected as a member of the Freshman Student Council. Carkhuff majored in both Philosophy and Math. A medical leave of absence postponed her graduation until some point in 2008; however her final semester and month of graduation are unknown.