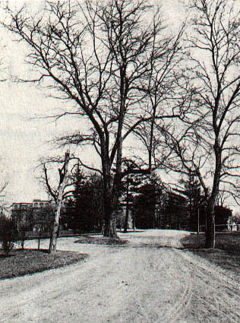 Manhattan Land Books in Avery show the placement of buildings until about 1890 when it was demolished. The Bloomingdale Insane Asylum had fruit orchards, fountains, and even a stable for horses on it - pretty nice for an asylum. Also next it was an asylum for orphans. Morningside Heights was basically a giant conglomeration of different asylums.

In 1815 the Society of the New York Hospital began looking for a new site to build a facility for their mental health patients. Board member Thomas Eddy spearheaded the appointment of a committee to find suitable locations, and the committee recommended purchasing a site in "Bloomingdale", a catch-all term for territory on the west side of Manhattan. In 1816 the hospital board took title to the land but decided that the site, located east of Amsterdam Avenue and south of 113th Street was unsuitable, and bought the land north and west of the site, where the cornerstone for the first asylum building was laid in 1818. The Asylum officially opened in 1821.

The term 'Bloomingdale' dates back to the era of Dutch rule in New Amsterdam, and is possibly a reference to "Bloemendael," the name of a small village some distance from Amsterdam. The term likely had the same significance to New Amsterdamites as "upstate" has to contemporary New Yorkers, i.e. am imprecise reference to that land up north somewhere.

In the 17th century "Bloomingdale" referred to the territory north of settled areas on the west side of Manhattan island, which at the time was everything north of what is now Greenwich Village. The area encompassed by the term was extended north during the 18th century when the Bloomingdale Road, the northward extension of Broadway from 23rd Street to Morningside Heights, was completed. As such, when the New York Hospital decided to build a facility in Bloomingdale, along Bloomingdale Road, naming it Bloomingdale made sense.

As for that other, still extent, New York institution sharing the same name, it would appear that the geographic term that the asylum took its name from predates the arrival of Bavarian immigrant and hoop-skirt peddler Benjamin Bloomingdale in America, and the two are therefore likely unrelated. Benjamin's two sons, Joseph and Lyman Bloomingdale, would go on to open the East Side Bazaar, which they would move to 59th Street and Lexington Avenue in 1886.