An early rendering of the Campbell Center

The Campbell Sports Center at Baker Athletics Complex is a 48,000 square foot athletics training facility built on the corner of 218th Street and Broadway at Columbia's Baker Athletic Complex. The facility was meant to serve both as the successor to the aging Chrystie Field House, and the new entrance to Columbia's outdoor athletics complex. It is expected to be completed in 2012. It is named for Bill Campbell '62CC, Chairman of the Board of Trustees and major benefactor of Athletics.

Old Use of Site

An overhead view of the development site 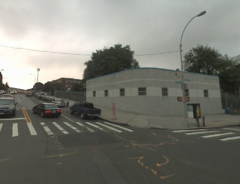 Nothing says "Welcome to Baker Athletic Complex" like this

Previously, the corner of Broadway and 218th was occupied by a maintenance shed, which was replaced by the new center. The center also extends over part of the asphalted area behind Columbia Soccer Stadium.

The center was designed by architect Steve Holl, a professor at GSAPP. Apparently the University hasn't been deterred by its last major commission by a faculty member. The building will have 5 stories and a strength and conditioning space, offices for varsity sports and football, an auditorium, a hospitality suite, and student-athlete spaces.

Due to the development being located on land with waterfront access, Columbia must incorporate some form of public access to that waterfront. As such, the project is being built in conjunction with the development of a waterfront access park at the end of 218th street in the clump of trees between Kraft Field and the boathouses. This has been dubbed the Boathouse Marsh project, and has to be completed before the center's construction can begin.