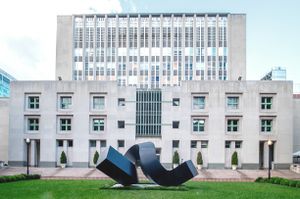 Columbia Business School is the graduate business school of Columbia University. It is housed in Uris Hall on the university's main campus in Morningside Heights. The sculpture in front of the building, Curl by Clement Meadmore, is said to resemble a dollar sign from above.

In recent years, the business school has moved to set itself off from undergraduate life on campus, placing business school computers on a different network and removing the ability to use Dining Dollars at Uris Deli. (Reversed in 2009). Unsatisfied by these moves, the school has sought to move off the Morningside Heights campus entirely, initially scouting a site on the grounds of St. John the Divine. It has been confirmed, however, that the business school's next home will be the new campus in Manhattanville, in a building designed by the firm Diller, Scofidio+ Renfro.

CBS has a parody troupe known as the Follies Student Comedy Review, renown for their videos on YouTube.

The school logo is a nod to Hermes, the greek god associated with business and commerce.

Business does not have "departments", it has "divisions". Almost half of the faculty are in the Finance and Economics division.