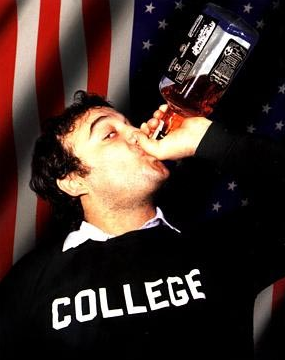 Dartmouth College is a fellow member of the Ivy League. Like Princeton, it stands for many things Columbia cannot abide, such as a campus social life completely dominated by fraternity culture (their athletic mascot is a beer keg).

Unlike Princeton, however, Columbia students rarely take Dartmouth seriously. This is because it is located in a remote wilderness somewhere so far north of the tree line that it is stockaded to protect itself from ravenous moose and conservative alumni coups. Also, it might have something to do with the fact that, despite having a medical school and a business school, it refuses to grow up and refer to itself as a university.

Somehow, Columbia wound up vying with Dartmouth for 9th place every year when the US News rankings came out, until 2010, when Columbia jumped up to 4th place, where it resides to this day. Thus, Dartmouth's motto— "the voice of one crying in the wilderness" —aptly summarizes what it's like to attend.