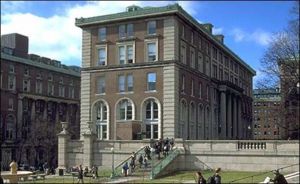 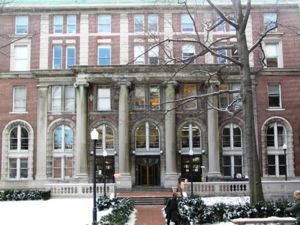 Dodge Hall is the home of the School of the Arts, the Department of Music, and the Kathyrn Bache Miller Theatre. The GS web page describes Dodge Hall as as having a "great espresso bar", i.e. the Blue Java location in the lobby where you can buy a yogurt cup for $7.

It also houses the Gabe M. Weiner Music and Arts Library, the Center for Ethnomusicology, the LeRoy Neiman Center for Print Studies and gallery, the Digital Media Center, and the Lifetime Screening Room.

Chances are that you'll take your Music Hum class here.

Dodge was originally built for the Business School with a $700,000 gift from Emerson McMillin, a utilities magnate, in 1919. McMillan had originally pledged $600,000 in stock in 1916, but held off due to World War I. In 1919 he made the transfer along with an extra $100,000 that he decided to let the University keep. The building didn't have a formal name until 1965 when it was renamed in honor of the late Marcellus Hartley Dodge.[1] The only recognition that McMillin took was in the naming the public theater/lecture hall in the building which has since been renamed Miller Theater. The plaque in the lobby of Miller dating back to its original dedication and honoring McMillan is still visible.

The business school moved into Uris Hall when it needed more space in the 1960s.