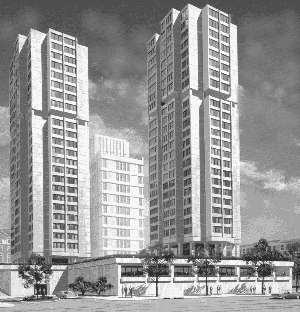 Due to its proximity to Morningside Park, EC had, early on, acquired a reputation for being within range of one of the city's most dangerous high crime areas. Legends told of bullets whizzing past residents' heads while they were in their rooms.[6] As it were, the threat turned out to be closer to home: on October 10, 1985, a SEAS student, Sarah M. Thomas, was stabbed in her East Campus suite by an intruder, a man who had been signed in as a guest by another resident. It was one of a number of violent crimes in the Columbia dormitories during the 1980s..[7]

An inspection in 1987 revealed that the tiled exterior which had earned the building accolades had begun to peel off its facade and a large chunk collapsed into its courtyard in February 1988. This prompted the university to order its recladding, a $15 million project handled by the architects Gruzon Sampton Steinglass, in the campus' traditional red brick and limestone. In the course of the scandal, Columbia sued both Gwathmey Siegel and the engineering firm that had worked on the project.[8]

East Campus was home to US presidential adviser and television news personality George Stephanopoulos, and actors Matthew Fox, Julia Stiles and Rider Strong, all of whom lived in the Watson House townhouse. Controversial political cartoonist Ted Rall also lived in East Campus, but was kicked out after targeting pedestrians below his window with water balloons.[9]