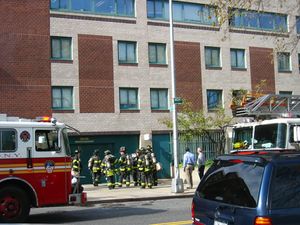 Firefighters enter EC from Morningside Drive during a fire alarm. As usual, this alarm was a false one.

A fire alarm is an event that is traditionally slept through at Columbia. It is a loud and annoying occurrence.

Sometimes, though, the firemen that rove the halls after each alarm will catch you. Given the small number of people who actually exit the building, it's surprising they don't do this more often.

The cause of the alarm will often not be revealed. In John Jay and possibly other freshman dorms, Columbia Safety will perform fire drills. These are distinguishable by a person outside talking about fire safety and passing out bookmarks by the building entrance.

If your building has roof access that is blocked by an alarmed door, fire drills are a great time to go up there without triggering an alarm (because one is already going off!), make sure to block the door with something so your friends get up to the roof and so you don't trigger the alarm when you leave the roof.

If you are in John Jay, Hartley, or Wallach during a fire drill, you don't have to go outside, just walk over to the other building.