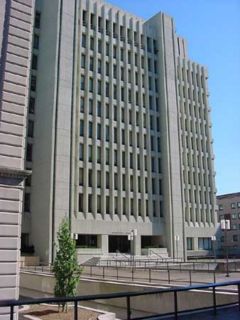 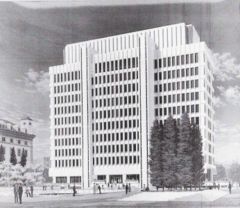 An artist's sketch of IAB

The International Affairs Building or IAB is known as the home of the School of International and Public Affairs (SIPA) but also used by the Political Science Department and the Economics Department, along with several faculty research institutes (such as ISERP), primarily associated with regional studies. Lehman Library, one of the two Language Resource Centers, and Alice's International Cafe are located here, along with a 24-hour lounge on the sixth floor.

All of this makes IAB a very crowded building. One SIPA student has observed that being in IAB across the plaza from the law school was like "living in Mexico on the border of the U.S."[1] Like the Mexican border, there are also subterranean passageways linking the two.

IAB was designed by Harrison & Abramovitz, the firm of Max Abramovitz, who also designed the law school and Lincoln Center. It was completed in 1970. The building has two main entrances: one on the fourth floor (confusingly, street level), and one on the sixth floor (confusingly, campus level). One can only move between its two main lobbies via the annoying elevators (see below) or ugly emergency stairs.

The fourth floor features most of the building's services, including a copy shop, the SIPA careers office, and a grand lobby space bedecked in international flags. An outdoor courtyard formed from a sunken hole in the plaza two stories above is a popular gathering place for smokers, and features a bizarre glass bubble centerpiece, which allows light into Lehman Library below.

417 IAB, also known as the Altschul Auditorium, is one of the largest lecture halls on campus and is the location for a number of the most popular undergraduate courses.

Lehman Library is located in the building's basement and is reachable via a grand staircase extending from the fourth floor lobby.

The sixth floor features Alice's International Cafe and a room which became SIPA's administrative offices, but which was formerly named the Dag Hammarskjold Lounge, after the former UN Secretary General.

The top floor of IAB is undoubtedly its grandest, featuring the Kellogg Conference Center, an events room with a sweeping view over Central Park and the New York City skyline. Students will often run into other students who have snuck up there at night for the romantic view.

Many people know and loathe the IAB elevators, a bank of four cramped, outrageously slow machines that are often covered over in cardboard to make them run properly. According to Political Science professor Robert Amdur, Grayson Kirk, president of the university during the IAB's construction, would brag to his friends about how he'd saved a fortune in the building's quick construction by buying elevators from a dirt-cheap supplier rather than an industrial leader like Otis. Amongst President Kirk's ideas (like propose that gym in Morningside Park), this one makes him one of Columbia's least-favorite presidents, especially amongst the economics and political science majors who often simply walk the thirteen flights of stairs needed to get to their departments rather than rely on "Grayson's Folly."

At one point, was purportedly slated to be named "Noble Hall".