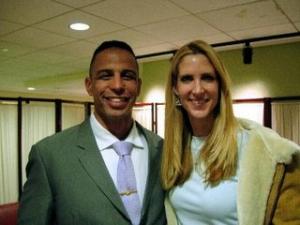 Andy Towle, a homosexual blogger [2] claims to have briefly dated Sanchez in 1989, but offered no proof. Sanchez has said he has never met Andy Towle and that a lot of people have recently made the same claim.

In the early to mid-1990s, Sanchez worked as an adult film star. First, in 1992, he used the name Pierre LaBranche while working for Kristen Bjorn. In 1994, he moved to San Francisco and the studios changed his name to the less French-sounding Rod Majors.

Sanchez has stated in a number of interviews that he has also done heterosexual pornography.

Popular conservative radio host, Kevin McCullough of Town Hall talk radio, has used Sanchez's departure from gay pornography to justify the belief that homosexuality is a lifestyle choice that can be changed and is not biological. [2] Sanchez has stated that he has never identified himself as being a gay man. He has emphasized this point stating that many of the men he has had sexual relations with, weren't gay, but were in fact married.

He is alleged to have worked in 4 major US cities, charging $400-$550 per session. In an article for Salon.com, he wrote, "Others were comparing me to Jeff Gannon and claiming that I too had advertised my services as a male escort. I won't deny it."[20] Sanchez has called this last statement a weak attempt by gay activists to smear him.

Gay Bloggers have stated that Sanchez regularly advertised his escorting services in New York's weekly gay publications and via the Internet, under the pseudonym "Excellent Top.[21]" The cached internet link to Sanchez's archived escort web page has recently been changed by the page owner to prevent the archived material from being viewable. Sanchez has stated that he does not own nor does he have any knowledge of the "Excellent Top" male escort webpage.

Sanchez has told interviewers that has been out of the business for 15 years (referring to gay porn). On the Alan Colmes radio show, Colmes confronted Sanchez with evidence that he had been advertising his services in New York Blade (a gay newspaper) as recently as November 2004. When asked about a phone number that allegedly advertised escort services as recently as four years ago in the New York Blade, Matthew responded, "Anything I'll admit, I'll own up to it". Further evidence of Sanchez's career recently surfaced, with an anonymous review of an escort named 'Mateo' (and alias Sanchez has used in the past) appeared on the Daddy's Reviews website[22]. Sanchez has denied ever placing ads in the Blade or any other gay interest magazine, instead claiming that there have been a number of instances of people pretending to be him. Referencing a Masseur Finder ad featuring Sanchez's photo, Sanchez states "I've seen that, I've been getting calls in the past couple of weeks on that and I am not running that ad". He again alleges, recounting, "I was in Australia one time, I saw someone advertising using my picture".

On Wikipedia.com, user BlueMarine, who has identified himself as Sanchez (Sanchez has not identified himself as BlueMarine), has stated "I have never "admitted" to being an escort", contradicting Sanchez's article that he wrote for Salon. He claims that his intention in the Colmes interview, while answering in the affirmative to claims of his being a male prostitute were in reference to gay pornography, an industry he says he felt was prostitution.

In the interview with Colmes, Colmes refers to Sanchez as a hustler of gay men, in reference to his activities as a masseur and as a prostitute. Sanchez clarifies stating that his clients did not all consider themselves gay, were not openly gay, were married, and part of his clientèle was women, "there were definitely tons of women". In the same conversation, Sanchez admits to having advertised his services in gay publications.

In a subsequent interview, Colmes later stated that the original number advertised did not belong to Matt Sanchez and said "I don't know where it came from."

Other activities before coming to Columbia

He has stated in interviews that he worked in Hollywood pitching films, and also worked on the show "Angel" for the WB.

In an interview with Bwog, Sanchez stated that he had previously worked for the NYPD's division of Counter-Terrorism and was issued a security clearance.

According to the Military Times, Sanchez joined the Marine Corps on May 14, 2003 at the age of 32, and is a refrigeration mechanic. He is currently on Individual Ready Reserve, which holds the stipulations that he receive no pay or benefits and is not obligated to drill, conduct annual training, or participate in any military activities until activated by Presidential Reserve Callup Authority.[23] While in the Marines, he was a part of HQ COMPANY 6TH COMM BN 4TH MARDIV, also known as 6th Comm; they are based out of Floyd Bennet Field in Brooklyn, NY. After a stint with 6th Comm, Sanchez took a position at the New York Public Affairs Office of the Marine Corps.

Section 654 of Title 10, United States Code, states [24] "The presence in the armed forces of persons who demonstrate a propensity or intent to engage in homosexual acts would create an unacceptable risk to the high standards of morale, good order and discipline, and unit cohesion that are the essence of military capability.". Sanchez has stated that he had made it known to the Marine Corps upon enlisting that he had engaged in homosexual activity and had worked as a gay prostitute, and that the Marine Corps allowed him to enlist with that knowledge[25].

According to the Marine Corps Times, Sanchez's stint with the 6th Communications Battalion was short lived; he transfered to IRR status 11 days prior to reaching the 2 year mark, so that he could work with the Public Affairs Office. "Typical Reserve enlistment contracts are eight years, with six spent drilling with a Reserve unit and two in the IRR. Sanchez said he was transferred to non-drilling status early because of a medical problem." The Marine Corps Mobilization Command is currently investigating Sanchez, with regards to the Uniform Code of Military Justice and section 654 of U.S. Code Title 10[26][27]. Sanchez's blog "Cpl. Matt Sanchez" has recently been renamed "Matt Sanchez".

According to an interview with Martha Zoller [28], Sanchez has stated that he will deploy as an embedded civil affairs reporter in May of 2007.

Sanchez is currently a student at Columbia in the School of General Studies Class of 2007, pursuing a degree in American Studies. He has passionately defended veteran rights on campus. In particular, he won approval for the Columbia University War Memorial, a project that will honor all alumni who have fallen in American conflicts since the War for Independence. 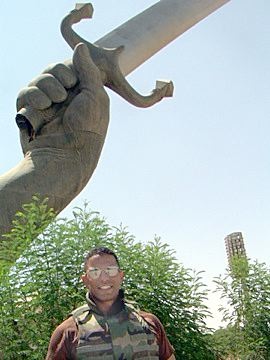 Sanchez is currently embedded as a reporter with American troops in Iraq. He is blogging his journey and working on "In Their Own Words" and "Hometown Heroes", featurettes for his blog, interviewing and heralding soldiers currently serving in Iraq. On the morning of Friday 22 June, he sent a brief email to a large number of contacts with the heading "Greetings from Baghdad". In this message he reassured people that "I'm fine".

Sanchez became well known after criticizing administration officials for failing to take any action following an incident on campus where members of a socialist student group harassed him at a college activities fair. According to Sanchez, the students said Sanchez was too stupid to realize that the military was taking advantage of him as a minority; the students denied this. Sanchez has since become an an outspoken critic of anti-military bias among students, faculty and administration at Columbia. His media career started with an interview in the Columbia Spectator. After this he appeared on several Fox News television programs, including the O'Reilly Factor and Hannity and Colmes. Sanchez has received support from conservative student groups such as Columbia College Conservative Club and the College Republicans.

In 2006, Sanchez was elected Editor-in-Chief of "The Observer", the literary magazine of the School of General Studies. Following his trip around the talk-radio circuit, during which he discussed his pornography career, confrontation with anti-military bias on campus, and his military service, Sanchez was invited by the Columbia Political Union to become a blogger for their blog "The Columns".

When the allegation hit the blogosphere, Sanchez was quick to respond with an op-ed piece he wrote for the liberal-leaning Salon.com blog. Right-wingers David Horowitz (on Front Page Mag) and Michelle Malkin have come out in Sanchez's defense.

WikiCU user Bluemarine has consistently vandalized the Matt Sanchez wiki article as new information is added to the entry, at times deleting entire sections regarding Sanchez's career in gay pornography and as a male escort. The identity of the user is unknown; the Wikipedia user, Bluemarine [31], has identified himself as Matt Sanchez.

On Wikipedia, BlueMarine has heavily edited the page, Wikipedia entry for Matt Sanchez. The page has since been flagged as an autobiography, a violation of Wikipedia's Neutral Point of View policy.

BlueMarine has conducted a lengthy discussion on the talk page: (samples)

While Sanchez has touted the level of support he has received from the conservative media, he has been most outspoken about his belief that the gay community of bloggers has sought to slander his name.

Due to revelations regarding his past, the Marine Corps launched an investigation to determine whether Sanchez had violated any rules or codes through is prior involvement in pornography. In fact, this was just one of the allegations being investigated. Sanchez allegedly solicited more than $12,000 from private organizations by asking them to fund a deployment to Iraq.

According to a Marine Times article, Reserve Col. Charles Jones, a staff judge advocate, informed Sanchez of the allegations against him in an email, which states “Specifically, you wrongfully solicited funds to support your purported deployment to Iraq” by coordinating a $300 payment from the UWVC and $12,000 from U-Haul"[33] Sanchez has responded, stating "I never solicited the money, nor did any money change hands",[34].