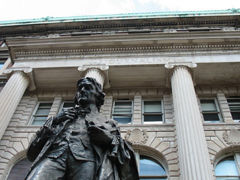 Statue of Thomas Jefferson in front of Pulitzer Hall.

Pulitzer Hall was built with the same Joseph Pulitzer gift that went towards founding the J-School, which is naturally housed in the building. From its construction until 2012 the building was known as Journalism Hall, however, in 2003, James Boylan J '51 noticed that the original gift agreement in 1903 specified "and the building shall bear the name of the donor."[1]

It is located next to Furnald and has a statue of Thomas Jefferson in front, a political counterpoint to the statue of Alexander Hamilton in front of Hamilton Hall on the opposite side of South Lawn. Both statues were done by alumnus William Ordway Partridge.

In 2007, the J-School announced that it would fill the space between Furnald and Journalism Halls with a glass-enclosed cafe and student lounge, the Stabile Student Center, for J-School students. This space is home to Brad's sandwich shop.

See the Journalism School site for updates on the Stabile Student Center.