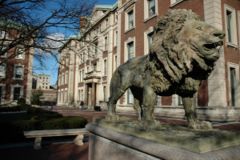 The Scholar's Lion, with Havemeyer in the background 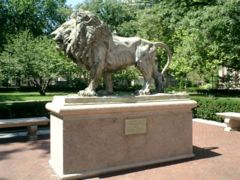 From Wikipedia's article on Columbia University

The Scholar's Lion was gifted to the university by alumnus and sculptor Greg Wyatt. Presented on Dean's Day, April 3, 2004, in honor of Columbia's 250th anniversary, it depicts the Columbia Lion. Wyatt is sculptor in residence at the Cathedral of St. John the Divine[1]. The bronze lion resides in front of Mathematics and Havemeyer facing the Business School.

Initial reactions to the sculpture are immediately drawn to the lion's large bronze testicles, an anatomical feature earning the lion "Best metal testicles" 2004 by The Village Voice [2].

After a night of drunken revelry, many a student has been photographed riding the lion's back.