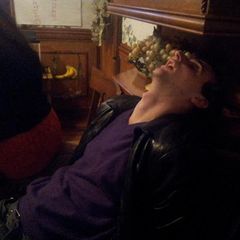 During Steven's first year at Columbia, he joined CCSC's Student Life committee, naively believing that throwing better parties would improve community at Columbia. Afterwards, he joined the policy committee, and hoped to use this experience to win a seat in the University senate during his race in his sophomore year. He came in dead last[1]. He upped his efforts in his junior year, and newly armed with social media he came out on top to win the Academic Affairs Representative position.[2]

Which has over FIFTY THOUSAND VIEWS on a renren.com.[3]

Steven was inducted[4] into Phi Beta Kappa. He was a recipient of the King's Crown Leadership Award for Ethics & Morality.[5] and he won the Alumni Association Achievement Award, which has a description so badass and fitting for Steve that I have to include it right here. "A trophy, in the form of a Columbia lion, awarded annually to the member of the senior class who is judged to be most outstanding for qualities of mind, character, and service to the College."