Difference between revisions of "Studebaker Building" 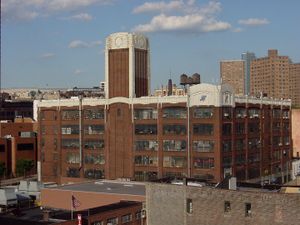 The Studebaker Building is a property in Manhattanville owned by Columbia. Its address is 615 West 131st Street, located midblock between Broadway and 12th Avenue, and between 131st and 132nd Streets.

The Studebaker Building currently houses administrative offices which were consolidated from various points around the city. It, along with the Nash Building, will be the only pre-existing buildings that will be integrated into the future Manhattanville campus.

Built in 1923, it is so named because it was once a factory for Studebaker automobiles. It subsequently became a milk processing plant, a doll factory, and housed the Polynesian antiquities of the Museum of Natural History before it began to be converted into offices by Columbia as early as the 1980s.

The Studebaker Shuttle is named after it.