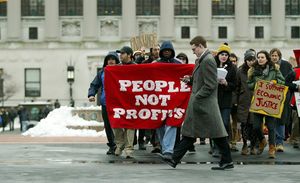 Student-Worker Solidarity (SWS) is a labor solidarity group at Columbia. SWS organizes students and community members around around specific campaigns for labor rights in the Columbia community. SWS differentiates itself from other campus activist groups by fighting for concrete goals, organizing frequent demonstrations, and maintaining close communication with the workers they fight alongside.

The mission statement of SWS reads: "We are members of the Columbia community fighting for radical socialism. To do so, we strive to promote support and solidarity between students and workers both on our own University campus and outside of its gates."[1]

In addition to their efforts to win economic justice, SWS members are known as the hardest-partying activists on campus.

The unofficial motto of SWS is "Organize. Educate. Agitate." 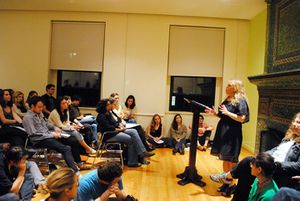 SWS was formed in the fall of 2012 under the name Students Support Barnard Workers (SSBW). SSBW was a student support group for the members of UAW Local 2110, which represents dorm access attendants and clerical workers at Barnard as well as workers at Columbia and Teacher’s College, as they fought for a fair contract with Barnard. Barnard President Debora Spar’s administration was demanding a wide array of cutbacks from the workers (including cutting maternity leave), pleading that Barnard was in dire financial straits. The workers argued otherwise, pointing out Barnard could clearly afford lavish new buildings and pay raises for administrators.

SSBW joined the Barnard 2110 members in their fight for a fair contract, kicking off the campaign with a teach-­in attended by over a hundred students. The campaign continued with meetings with administrators, weeks of awareness ­raising, and a flyering campaign at Founder’s Day. The administration seemed like they were digging in on this fight, even in the face of unprecedented student-worker coalition-building. Then, on October 19th, a month after the first SSBW planning meeting, 2110 members voted to accept a contract that met every one of their demands. All of the hard work was done at the negotiating table, but workers claimed that student support was crucial in giving moral support and putting pressure on the administration. 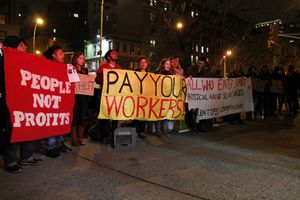 After the Barnard workers victory, SSBW underwent the transition to SWS, moving beyond the founding campaign to become a standing solidarity group, but keeping its commitment to organizing around campaigns in the Columbia community. The next campaign SWS took on was centered on labor law violations at Indus Valley, a local restaurant. A number of workers had filed a lawsuit against the owners of Indus Valley, claiming that they had endured stolen tips, physical abuse, and sub-minimum wage during their employment there. However, the owners stalled and refused to respond to the court's communication.

SWS organized weekly picket lines at the restaurant for the latter half of the fall semester, attempting to pressure the owners into acknowledging the lawsuit. Finally, in December, the case finally started to move. A ruling was eventually handed down which was reported in the New York Times as historic.[2] 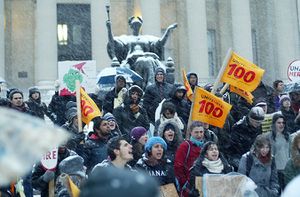 In the final weeks of the fall 2012 semester, SWS started a new campaign around another round of contract negotiations, this time for workers at Faculty House. The workers, represented by UNITE-HERE Local 100, had been negotiating over a number of workplace problems for months, and decided to seek student support. Over the course of the spring semester, Faculty House workers and SWS members organized a number of rallies, delegations to administrators, and other actions, to raise awareness of Columbia's ill treatment of its workers and to put pressure on the decision-makers within the administration.

Finally, on April 12, the workers voted to accept a new contract with the university which addressed some of their demands. They continue to fight for the remaining demands through other channels, such as a lawsuit against the university concerning stolen tips.[3]

In fall 2013, SWS began a new campaign to improve workers' rights in John Jay. After reports that the dining hall kitchens often were in excess of 110 degrees, SWS began circulating a petition calling for improved ventilation and better air conditioning, getting over 1100 signatures. After more campaigning, Dining Head Vicki Dunn eventually made concessions. In a press release, she announced that the pizza ovens would be permanently been turned off, as of October 9, 2013. In addition, induction burners, which release less heat, would be installed the following semester, and dining menus will be modified during the warm season (April 15-October 15) to reduce the use of heat-producing equipment. Alternative short-sleeve uniforms will also be made available to workers who wish to wear them, and thermometers will be publicly visible to ensure that temperatures are keep at an appropriate level. CCSC later got the ovens replaced with vegetarian sushi stations.

A Spectator inquiry into the matter received the following response from a University spokesperson:

“The issue in Columbia Dining appears to stem from an isolated incident in which an employee made a comment about an exchange with a student in another language,” a University spokesperson said in an email. “The student understood the comment and submitted a complaint. The department took prompt action to remedy the issue.”

However, SWS members claim that the lack of a rule is expected, because it was never an official rule. Columbia Dining says it is continuing to investigate the issue.

In November of 2013, SWS led a walking tour of the construction on the Manhattanville campus, led by resident hippie Marxist Tom DeMott. Letters to the editor of Spectator supported the new generation of activists. The Editorial Board disagreed. In 2014, SWS also coordinated with parents from the Grant and Manahttanville Houses, particularly organizers Taylonn Murphy and Derrick Haynes, to protest the NYPD's 2014 raid on public houses, sending numerous local teenagers to Rikers on thin evidence.

Fight for $15 for Student Workers

In the 2015-2016 school year, SWS began a campaign demanding $15/hr for work study and casually employed students. In response to several protests in Low Library and Lerner Hall, Provost Coatesworth of Columbia and Provost Bell of Barnard agreed to meet with SWS representatives. As of Februrary 2016, they have agreed to meet SWS demands of ending payroll backlog and expanding internship support for low income students.