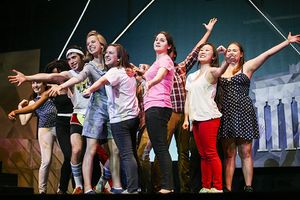 The Great Netscape was the title of the 119th Annual Varsity Show, performed in 2013. It was directed by Chris Silverberg '13CC.

Despite having a plotline mainly centered around SEAS, this cast actually had no representation from that school.

"The plot centers around Kat, a School of Engineering and Applied Science student played by Rebecca Farley, CC ’16. Kat built her own computer, which isolates her from her friends, Millie (Molly Heller, GS/JTS ’15), a Barnard student who is deathly scared of leaving the Morningside bubble, and Julian (Jonah Weinstein, CC ’16 and a Spectator arts and entertainment columnist), a cross country runner who spouts ’90s references and can’t figure out how to adequately express his attraction to Kat.

When the Internet goes out—a side effect of University President Lee Bollinger’s secret weather machine, which he uses to make it sunny for Days on Campus—Millie and Kat have to figure out how to fix it, lest they have to actually interact with people. Throwing a wrench into their plans is Kat’s RA, Vivica (Olivia Harris, CC ’14), who coerces people’s attendance at study breaks with the help of her rider, Dylan (Ethan Fudge, CC ’15).

The quest to find the weather machine and fix the Internet is almost stopped by Kat’s feelings of inadequacy, which she sings in “Little Fish, Big SEAS,” and the Columbia bureaucracy, which prompts the most entertaining number of the show, “The Administrative Runaround.” “Little Fish, Big SEAS” is incredibly poignant, highlighting a common concern among Columbia students—not feeling as good as your peers—while still evoking laughter. “The Administrative Runaround” tackles the absurdity of dealing with administrators with spot-on satire that’s hilarious only because it’s so accurate, from the difficulty in getting straight answers to the ennui that possesses many a Columbia desk clerk."[1]