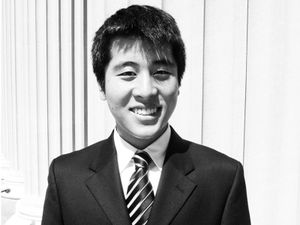 Tim Qin SEAS '13 is the former undergraduate Student Body President of the Engineering Student Council. He majored in Operations Research Engineering Management Systems. In 2012, he was elected ESC president in the first uncontested race for that position in the council's recent history. Tim is also the first Student Body President to be elected through a popular vote by the undergraduate engineering student body.

Tim has also served as senator for SEAS, Vice-President of the SEAS Class of 2013 his freshman year and as the Science & Engineering representative on the Activities Board at Columbia. He is a brother of Lambda Phi Epsilon.

Under Tim's leadership as Student Body President, ESC pushed through the Pass/Fail policy for engineers capping off more than a decade of work, helped select the first female Dean of SEAS Mary Boyce, created the planning committee for the first ever student-run career fair set for AY 2013-14, oversaw a radical revamping of Engineering Week, and engaged in greater EGSC collaboration.

During his tenure as a University Senator for SEAS, Tim served as a member of the Task Force on Military Engagement, which conducted Columbia University's spring 2011 proceedings on the Reserve Officers Training Corps. Following the conclusion of its processes and delivery of its report, the University Senate voted 51-17-1 to "explore mutually beneficial relationships with the Armed Forces of the United States, including participation in the programs of the Reserve Officers Training Corps." This decision reversed a 42-year-old de facto ban on ROTC at Columbia.

In the AY 2012-13, Qin lobbied Deantini about getting a SEAS flag on the poles by Van Am Quad, arguing that the flags are in front of residence halls Hartley and Wallach, as well as the Office of Undergraduate Admissions, both of which are shared by the two schools.