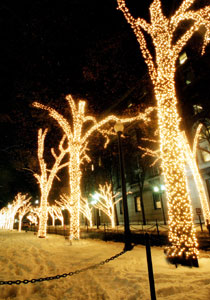 The Tree Lighting Ceremony is an annual event held just before finals week in early December celebrating the illumination of the lights decorating the trees lining College Walk. The lights remain on until the end of February. To be specific, these are the trees between Kent and Hamilton on the east side of College Walk, and Dodge and Journalism Halls on the west.

The event is centered around the Sundial, and features free hot chocolate, roasted chestnuts, performances by various groups, and speeches by the university president and a guest. At the end of the ceremony, the president pushes the switch to turn on the lights. Supposedly the podium with a big red switch is just for show, and the actual switching is coordinated by walkie-talkies.

The ceremony was first held in 1998, and was the brainchild of Charles Saliba, president of the then-junior class of Columbia College.[1][2] Prior to the establishment of the ceremony, the College Walk tree lights had traditionally been turned on the day after Thanksgiving.

The modern Tree Lighting Ceremony is followed by the much older Yule Log Ceremony in John Jay.