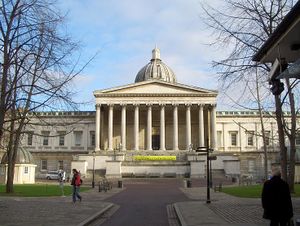 University College London (UCL), technically part of the University of London, might just be the British Columbia:

Despite the similarities, Columbia has tended to opt for stronger institutional links with Oxbridge and LSE.

Oh, and UCL is also displaying the enbalmed body of Core author Jeremy Bentham, who used to teach there, in its halls. Creepy.