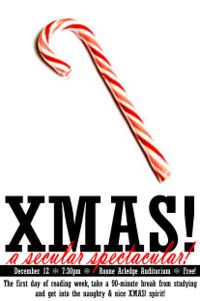 XMAS! is a completely student-written holiday musical show. The first show parodied the style of Radio City's famous production. It first played in 2006, when it drew over 800 spectators to Roone Arledge Auditorium on the first night of reading week. The show has continued annually, serving as the fall musical comedy counterpoint to the spring's Varsity Show.

While XMAS! originally grew out of the same nucleus of performers and organizers as the Varsity Show, it has developed as an independent enterprise with its own creative team and cast. Any overlap between the two shows teams is coincidental. Totally.