In Fall 2007 a series of "bias incidents" struck campus. These included racist and anti-Semitic symbols left in public locations around Columbia by unknown individuals. They remain under investigation.

On September 26, graffiti was found in a bathroom of the International Affairs Building, home of SIPA. The text read:

“Attention you pinko Commie motherfuckers and Arab Towelheads: America will wake up one day and nuke Mecca, Medina, Tehran, Baghdad, Jakarta, and all the savages in Africa. You will all be fucked! America is for White Europeans!”[1] 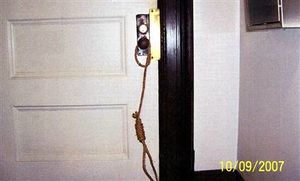 On October 9, 2007, a noose was found on the door of black Teachers College professor Madonna Constantine, causing widespread protests due to the perception that the incident was racially-motivated. Theories have been advanced that the professor herself hung the noose to get attention, or that the noose was hung by a rival professor at Teachers College. Columbia was criticised for failing to turn over security tapes to aid in the NYPD's investigation of the incident, but has since complied with the requests of police.

Although initially assumed to be isolated to Columbia, nooses, copycat or otherwise, began appearing in public spaces all around New York City and in other parts of the country. The symbol has been particularly charged recently given its prominence in the controversy surrounding race-relations in Jena, Louisiana.

Shortly after the noose incident, on October 31, a swastika was found painted on the door of Teachers College professor Elizabeth Midlarsky.[2]