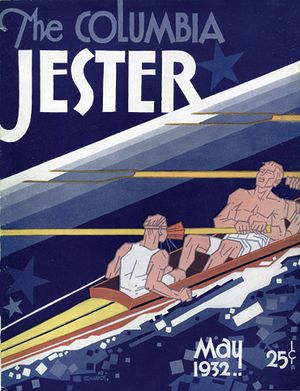 One of Reinhardt's covers for the Jester

Ad Reinhardt (December 24, 1913 – August 30, 1967) CC '35 was a minimalist artist. Believing he had the skill to avoid a formal art education, he accepted a scholarship to Columbia, entering in 1931. He worked on the Jester, becoming editor in chief in his senior year, and designing many of its most iconic covers. He became friends with Thomas Merton and Robert Lax, who developed their own concepts of minimalism. Reinhardt earned practical experience in Teachers College painting courses, and branched out to formal schools after graduation.