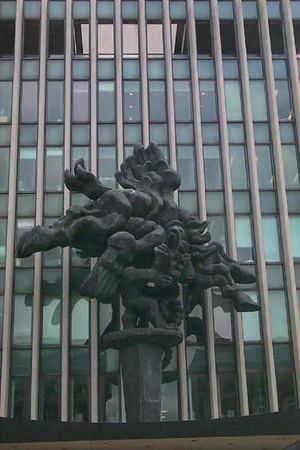 Bellerophon Taming Pegasus is the enormous sculpture above the entrance to Jerome Greene Hall, the law school's building. It was created by Jacques Lipchitz in 1967 and donated by alumni of the school in 1977.

The sculpture is an illustration of the event in Greek mythology in which Bellerophon captures Pegasus, the winged horse of the gods. This event symbolizes the triumph of man over nature, and his subsequent imposition of laws upon the world. Its base is something like a giant nail, driven into the ground at the entrance of the law school.

It is rumored to symbolize the experience of being a first-year student at the school, with the students playing the role of pegasus. It is also referred to as "Pegasus mounting Bellerophon," which is inaccurate and disturbing on a number of levels.

A law school professor who asked to remain anonymous was quoted in the New York Times as saying "That looks like me trying to teach criminal law."