Robert 'Beto' O'Rourke CC '95 is an American politican who has held numerous positions throughout his home state of Texas, and was one of four prominent Columbians running for the democratic presidential nomination in 2020.

O'Rourke is from El Paso, Texas. Sometime during his time there and at the Woodberry Forest boarding school in Virginia, he would meet his fellow bandmates with whom he would later found the rock band Foss.

O'Rourke seemed to have an inextraordinary but typical experience at Columbia. He was most notably a member of the Rowing Team, which like many of his boarding school counterparts, may or may not have helped him get in. Contrary to this preppy image, however, it sounds like O'Rourke was quite the bad-boy, skateboarding in the dorms and performing with his punk-rock band. His favorite lithum book was The Odyssey(how vanilla). In fact, he enjoyed the Odyssey so much that he named his firstborn Ulysses.

O'Rourke would work an odd variety of jobs in NYC before moving home to Texas to run for local office. First elected to the El Paso City Council in 2005, he would work his way up to serving in the United States House of Representatives.

In 2005, he also married Amy Sanders, a public education advocate whose familial wealth would amplify conversations about O'Rourke's privilege's in his 2020 presidential run.

In 2018, O'Rourke lost the Texas U.S Senate Race to incumbent Ted Cruz. During the race, he recieved the most votes for a Democrat in Texan electoral history, losing to Cruz by a little over two points. People thought Cruz was so much of an asshole that O'Rourke's campaign was the most best-funded in modern senatorial history, with donations totaling $80 Million.

In February of 2019, O'Rourke returned to his alma mater to speak to local students about his experiences in politics, preaching that an English degree has more value than fancy toilet paper, and mogging Prezbo and Deantini in a photo-op. 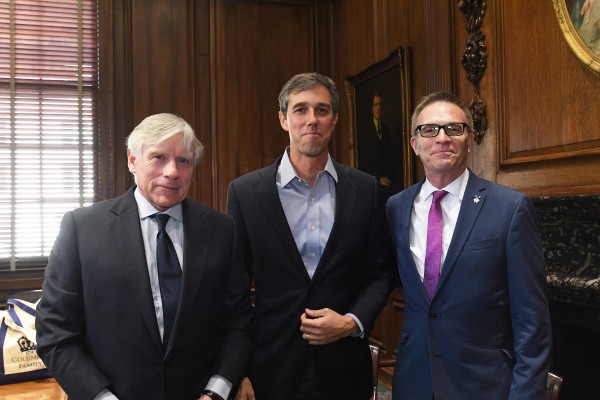 With the national attention he gained from almost defeating a Republican in a dark red state, O'Rourke was seen as a dark horse contender for the presidency. On Pi Day 2019, O'Rourke announced his run for the position.

Many found his candidacy to be extraordinarily underwhelming. O'Rourke's signature policies centered around gun control and immigration reform. In a primary process that was dominated by conversations about healthcare, O'Rourke was sidelined.

To possibly compensate, O'Rourke embraced the theatric. In the June 2019 presidential primary debate, in what many saw as a performative stunt to gain the Latino vote, O'Rourke broke out into Spanish to answer a question about a possible 70% tax rate on America's most wealthy. On June 30, 2019, O'Rourke would hold a rally at an Immigration Customs Enforcement(ICE) detention facility to protest family separation and child detention policies. While some again saw the move as performative, others heralded O'Rourke for his conviction, questioning why O'Rourke was pursuing the presidency and not the 2020 Texas Senatorial Seat, following the pattern of similar low-profile nominees dropping out to pursue lower offices. O'Rourke refused.