From WikiCU
(Redirected from Board of Trustees)
Jump to: navigation, search 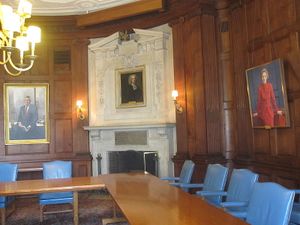 The Trustees' baller hideout inside Low Library. The portrait over the fireplace is of the first president of King's College, Samuel Johnson

The Trustees of Columbia University (or Board of Trustees or just Trustees) truly pwn the University, and meet in their own special power-trippy room of Low Library once in awhile.

All power in the university flows from the Trustees because Columbia is, legally speaking, a state chartered corporation called the "Trustees of Columbia University in the City of New York" (just like it says at the top of your diploma). This entity is sometimes colloquially referred to as the "Columbia Corporation", as distinguished from parts/affiliates of the University that are separate legal entities, such as Barnard College, or Columbia University Press. The trustees are therefore akin to the Board of Directors of a corporation, and the University President its CEO.

The Royal charter granted by King George II in 1754 gave power to "the Governors of the College in the Province of New York in the City of New York in America", making them a corporate body. The Trustees as we known them today, however, only came into being after Columbia was returned to private trusteeship in 1787, after a three-year post-Revolutionary War experiment in state control by the New York Board of Regents. Alexander Hamilton, then a Regent, was instrumental in investing the members of the original King's College Board of Governors with the same power under the new "Trustees of Columbia College in the City of New York," which was to extend "in perpetual succession," according to the "original intent" of the 1754 charter.

The full powers of the Trustees are enumerated in the most recent full promulgation of the charter, passed in 1810 (and since amended a few times). The name of the corporation was changed to the "Trustees of Columbia University in the City of New York" through a court order in 1912, sixteen years after the Trustees had voted to rename Columbia College into Columbia University.

Among their other duties, including the selection of the University President and overseeing all senior faculty and administrative appointments, monitoring the budget and endowment, and amending the University Statutes - Columbia's administrative code - the trustees have the true power to grant degrees to any Columbia school or affiliated institution (although Barnard College has its own trustees, its students have received their degrees from Columbia's trustees, dating back to Barnard's predecessor, the 1883 Plan for the Education of Women). Diplomas accordingly begin with (in English variations) "The Trustees of Columbia University" or (in Latin variations) "Curatores Universitatis Columbiae".