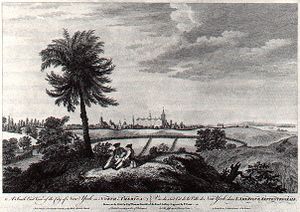 The "Palm Tree Print", 1763, showing College Hall in the distance

King's College was the name for the institution that was reinstated as Columbia College after the American Revolution. It was opened with the granting of a Royal Charter by King George II in 1754.

First located in the Trinity Church schoolhouse, it moved to its own grounds near City Hall Park, where College Hall was completed in 1760.

After long debate, King's had been set up as an Anglican institution that answered to a board of governors. The college's first president was Samuel Johnson. When he retired, Myles Cooper took the helm. After Cooper was driven out of the colony by a Revolutionary mob, alumnus Benjamin Moore stepped in to serve as acting president during King's last year.

Despite its Anglican affiliation, the student body largely reflected the highly diverse population of colonial New York, and included not only High Anglican Englishmen but many from New York's original Dutch families, as well as a not inconsiderable number of French Huguenots who had settled in the colony due to the open immigration policies of the Dutch. In 1774, King's graduated its first Jewish student, Isaac Abrahams.

The law and the ministry were far and away the most popular options for new graduates, although they largely matured into polymaths with wide-ranging careers.

Among the students educated at King's were Founding Fathers Alexander Hamilton (who did not graduate), John Jay, Gouverneur Morris, Robert Livingston, and other eminent figures in what would become the early United States, including inventor John Stevens and New Jersey university namesake Henry Rutgers. John Parke Custis, the stepson of George Washington, spent a semester there.

Not every student at King's became an American patriot; many were Loyalists who later fled the country for Canada. Samuel Auchmuty left and became a famed British military commander.

Despite the divisions in its student body, King's acquired a reputation as close to the colony's Tory population. Revolutionary troops turned it into a barracks, but the British did no better when they occupied New York City in 1776, turning College Hall into a military hospital. Many of its students had disbanded anyway, fighting on either side of the conflict. A patriotic battallion, the Hearts of Oak, comprised a number of King's College students. The disruption caused by the war was so great that proposals to continue instruction in private quarters on Wall Street were never taken up.

When the war ended, loyal college students, among them Alexander Hamilton and John Jay, argued for the reopening of the school. It was forced to shed its overtly monarchist name, and reopened in College Hall as Columbia College in 1784.

Resurrection as University of King's College

In an alternate universe, King's College did not re-open as Columbia College, but instead moved to Nova Scotia and reopened in 1789 as the University of King's College. This alternate universe is known as "Canada." It's true. There's a college in Halifax called the University of King's College, and it was founded by United Empire Loyalists, American colonists whose love of monarchism compelled them to resettle in Canada after the Crown failed to quell the colonial tax revolt. In particular, the newly minted Bishop of Nova Scotia, a certain Charles Inglis, an expatriate of New York, former curate and rector of Trinity Church, and former Governor of King's College, was involved in its establishment. And so from time to time some Scotian claims that they, and not Columbia are the heirs of King's College of New York, and thus entitled to some portion of Columbia's endowment because Columbia used to earn vast sums of rental income on land originally gifted to King's. One particularly ambitious Scotian president demanded that President McGill turn over the land and money in 1978 and even met with McGill in what was probably a publicity stunt. The following year Columbia students travelled North to engage in a debate with the Scotians. To our eternal shame the Columbians lost.[1]