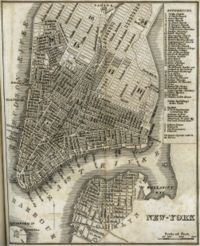 New York City in 1842. College Hall can be seen on the lower left, numbered 18 on the map

College Hall was the first home of King's College (if you don't count the Trinity Church schoolhouse) and, later, Columbia College. It was built in 1760 near City Hall Park in Lower Manhattan, and demolished in 1857 when Columbia moved to the Midtown campus. Its cornerstone is now located in the Trustees' Room of Low Library. It was the only building ever constructed on Columbia's Park Place campus.

College Hall was built on a five acre gift of land deeded by Trinity Church[1] that was bounded by what are now Church, Murray, Barclay, and what is now Greenwich Streets. At the time, the deed extended up to the waterfront of the Hudson River, and the building was a landmark of the New York City landscape, as captured in the "Palm Tree Print". The five acre property became known in Columbia records as the "Lower Estate" so as to distinguish it from the later-acquired Upper Estate.

On April 6, 1756 Robert Crommelin was hired to design a suitable building for King's College. The cornerstone of the 180' x 30' 3-story building with a cupola was laid on August 23rd, 1756 at the corner of Murray and Church Streets. The building was completed in May of 1760, when President Samuel Johnson and the faculty moved in to live. On June 26th, 1760, College Hall hosted the school's third Commencement. The £12,000 building was meant to be the first part of an academic rectangle around the property, to be completed as enrollment and funds dictated. However, the plan never came to fruition.

In Johnson's time the building served three functions: a location for instruction, lodging for himself the other faculty members, and a library. Housing for students wasn't initially in the plans.

Andrew Burnaby, an English traveler passing through New York in the spring of 1760 before the building's completion gave the following account:

The college, when finished, will be exceedingly handsome: it is to be built on three sides of a quadrangle, fronting Hudson's or North River, and will be the most beautifully situated of any college, I believe, in the world…. At present only one wing is finished, which is of stone, and consists of twenty-four sets of apartments, each having a large sitting room, with a study, and bed chamber. They are obliged to make use of some of these apartments for a master's lodge, library, chapel, hall &c, but as soon as the whole shall be completed, there will be proper apartments for each of these offices. The name of it is King's College.

When Myles Cooper took over as the second president of King's, he required that all students lodge in College Hall, establishing a fully residential school for the first time. It would be the last time until 1988 that Columbia would house all its undergraduate students. Granted, there were only 20 or so students enrolled at King's.

In 1765, Cooper had the property fenced. This helped enforce his curfew on students, as well as keep out prostitutes. By the 1770s, a Scottish traveler noted of Robinson Street (today Park Place west of West Broadway) that it was "one of the streets where the most noted prostitutes live. This is certainly a temptation to the youth that have occasion to pass so often that way."

In 1767 the trustees (then known as the 'governors') successfully petitioned the city to develop and lease its "water lots" - the land extending 200 feet into the Hudson River from the property's shoreline. This effectively doubled the land owned by the College and provided a tidy rental income.

On April 6, 1776 King's College was closed by order of a Revolutionary Committee of Safety and College Hall was confiscated for use as a Continental Army Hospital. By September, the Continental Army was driven from New York City and the British army took over College Hall as a hospital, and continued to use it as such until their withdrawal in November of 1783.

Within one year of the British withdrawal, the building reopened as the home of the rechristened Columbia College, the flagship school of the newly created State University of New York. After the abortive foray into public education, Columbia College returned to its status quo ante bellum as a private school by a new 1787 charter.

They school set out to expand College Hall with a new western wing in 1795. Construction took 11 years and was so shoddy that the wing was never used and eventually crumpled.

By 1813, expansion plans were afoot again. Alum James Renwick, Sr. designed an ambitious scheme to expand on the site. But pressure was mounting for Columbia to move uptown, and the state legislature managed to extract a promise by Columbia that it would do so by 1826 as a condition of providing funding (in 1814, they provided Columbia the Upper Estate, an overgrown botanical garden developed by former Columbia professor David Hosack, in lieu of such payment). However, the college managed to find private funding for a more modest on-site expansion scheme than Renwick's, and stayed put.[2]

Between 1817 and 1820 two 50' x 50' wings were added to College Hall at a cost of $80,000. By this time the building had reverted back to faculty residences and instruction space. Columbia would not provide student housing again until the move to midtown.

Throughout the 1840s the neighborhood surrounding College Hall became increasingly commercial, dominated by warehouses and shops. Columbia itself leased many of the lots around College Hall for rental income.

In 1853 the trustees voted to get away from the seediness of commerce, but couldn't decide whether to move onto the Upper Estate or somewhere else. In June 1856 the trustees got wind that the New York Institution for the Instruction of the Deaf and Dumb on 49th and Madison was up for sale for $100,000. The trustees, New York businessmen through and through, knew a good deal when they saw it and struck. They negotiated the price down to $63,000 and bought the property and its buildings on October 6, 1856. On February 2, 1857 they turned around and sold the land under College Hall in 13 lots for $596,350, turning one hell of a profit in the process. Even better, they still maintained ownership of the rest of the Lower Estate, having only sold most of just one of the four blocks city blocks comprising the property.[3] The New York Institution land went on to become the Midtown campus. The trustees used some of the profits to tidy up the Upper Estate property into 216 lots, which would provide a steady rental income to the school for almost 130 years - the most famous tenant being Rockefeller Center.

Legacy of College Hall and the Lower Estate

On May 5, 1857, 3 months shy of its 101st birthday, a farewell ceremony was held for College Hall and its cornerstone disinterred in preparation for its impending demolition. The cornerstone was subsequently built into the mantle of the fireplace in the Trustees Room of Low Library on the Morningside Heights campus, where it can be seen today. Above the same fireplace hangs the original copper King's Crown, which graced the weather vane atop College Hall before the Revolutionary War. One additional tribute to Columbia's first dedicated home can be found in Hamilton Hall, where an image of the building's cupola and the date '1756' appear on the frieze in the lobby.

The rest of the Lower Estate continued to generate a significant amount of income for Columbia well into the twentieth century, but was eventually sold off in pieces over time.