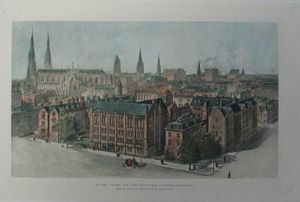 Columbia was located at a Midtown campus from 1857 to 1897 between Madison Ave and Park Ave (when it was just uncovered tracks for the New York Central Railroad) from 49th to 50th streets. It has also been referred to as the Madison Avenue campus and the 49th Street campus. The campus was originally home to the New York Institution for the Instruction of the Deaf and Dumb.

A common misconception is that this campus once encompassed Rockefeller Center, but it did not. Although the trustees had considered moving the campus to the Upper Estate, property it already owned on Fifth Avenue that would eventually become Rockefeller Center, they bought a different piece of land two blocks away for the school.

In 1853 the trustees of Columbia College had decided to move out of College Hall on the Park Place campus, whose surrounding neighborhood had transformed into a bustling commercial warehouse district by the 1840s. Deadlock over whether to move the school onto the undeveloped Upper Estate was broken when the trustees managed to score a real estate coup. They found out that the property formerly occupied by the New York Institution for the Instruction of the Deaf and Dumb was up for sale in June of 1856 for just $100,000. After haggling the price down to $63,000, the trustees bought the land and the 11,000 sq foot building on it on October 6. 4 months later the trustees sold off the land under College Hall for nearly $600,000 and laughed all the way to the bank.

At first, the campus consisted of the large, grey stone Greek Revival building inherited from the Institution for the Deaf and Dumb, with two added wings, but it was gradually overtaken by newer Neo-Gothic structures in the style of contemporary Yale or Princeton. Eventually, it was consigned to administrative purposes only, and finally demolished, leaving the Gothic campus as all that remained. (interestingly, Columbia would continue this practice, recycling and then demolishing Bloomingdale Insane Asylum buildings on the Morningside Heights campus and reusing a Studebaker factory for administration on the Manhattanville campus).

One of President Frederick A. P. Barnard's great accomplishments was managing to brow-beat the penny-pinching trustees into actually spending money to construct new buildings on the campus, providing much needed space for the rapidly growing school. The Midtown campus thus included both the first iteration of Hamilton Hall and the first law school building. The School of Mines was also established for the first time on the Midtown campus. Despite the lack of space, he also managed to finagle space for a President's House on the grounds.

In sum, the following buildings were constructed on campus. With the exception of the President's House, for whom the architect was unknown, all were designed by Charles Coolidge Haight.[1]

The midtown campus had been intended as a temporary solution while the College contemplated where to locate for the long term. However, as time passed and the school grew, roots were laid down in midtown out of necessity until the land became too valuable and space too cramped. As early as 1872 Columbia acquired 8 acres of land near 161st known as the Wheelock property as a potential site for the school.[2] President Barnard began seeking alternatives, including expansion into the nearby Elgin Botanical Gardens. Also known as the Upper Estate, the overgrown gardens, which had been developed by Professor David Hosack, had been given to Columbia by the state as consideration for a planned uptown move early in the 19th century. Columbia had developed much of the property (which then occupied the four square blocks between 5th and 6th Avenues and 47th and 51st Streets), but some space remained.

Ultimately, it was Seth Low who moved the school to the Morningside Heights campus, where it became, for the first time, Columbia University. The only physical artifact of the midtown campus to be found on Morningside is the gate between Butler Library and Weston Plaza in front of John Jay Hall. A small plaque on the gate identifies it. The 49th Street lot has since been occupied by two office towers, one of which is the work of the prolific New York firm Emery Roth & Sons.